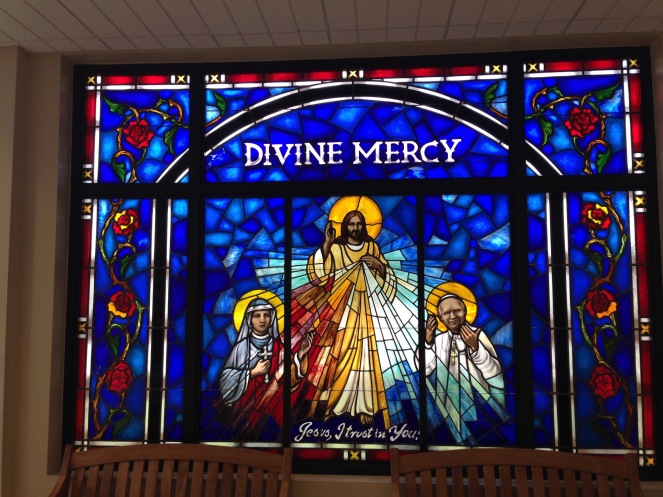 I appear to be in a season of blue light: blue light coming from fingertips last month, blue light in the Divine Mercy image and now, blue light for “Light It Up Blue,” for Autism Awareness month.

I had one of my rare moments of clarity meditating on the Divine Mercy image this month, which shows Christ with streams of red and blue light coming from Him, representing his blood and the water that came from His side on the cross. Your darling godson Liam, as you know, is autistic. His favorite color? Red. The color for autism? Blue. Coincidence? I think not. I will never again be able to look at that image without thinking of the Lord’s Divine Mercy pouring out for Liam and all autistic kiddos. Oh, and all of us, of course.

But first, a bit about that image. While I love the story of St. Faustina and the Chaplet of Divine Mercy, which promises great mercy at the hour of death. I must confess that I have always found the image itself a little (don’t hate me) hokey. Ok, since I have not been stricken down since writing that, let me explain. It’s hard for anyone to pull off a look that includes rays of light streaming from them.  I realize this is the image Christ gave to St. Faustina but is there any room for reinterpretation here?

I have always suffered from a more Protestant aesthetic when it comes to religious art.  The pastor at our last church took a lot of heat for not displaying the Divine Mercy image but, honestly, I was on his side.  While our tradition includes some of the most amazing art ever produced, it also includes lot of art that needs explanation and some of it is rooted in a very specific place and time (i.e. dated). Some of it can be a little over the top.  I am reminded of my Great Aunt Jo’s Infant of Prague statue, which to this day, I maintain was

the Catholic equivalent of a Creepy Clown. I know its eyes followed me around the room.  When we cleaned out her apartment after her death, I darn sure made certain that the Infant of Prague ended up in one of Cousin Frances’s boxes. My point? Some art can be inspiring and some can be distracting.

However, I did find inspiration in our current church’s new Divine Mercy stained glass window (above). See? It doesn’t have to be that bad.  And I was inspired to see my son’s personal struggle with autism in it. Sure, his behavior earned us our share of dirty looks and people moved away from us in church in the early years. By the time he was in first grade, though, many in the congregation had become Liam converts and were incredibly supportive. Our pastor regularly singled him out during his homilies, people loved his over-enthusiastic sign of peace and would seek him out to be “Peaced by Liam.” He had an early fascination with the Eucharist and, while he never paid attention during religious ed (RE) class, he could tell me everything about the sacrament. As the special ed RE teacher told me, “These kids really get it.” I will never forget his first confession, where he exited in tears, went straight in front of the altar and prostrated himself on the stone floor of the church for his penance. He sees the image of Jesus everywhere and to this day, expresses his anger at Adam and Eve for blowing everything for us. One of his favorite books is the Book of Revelation section of The Action Bible. Ted and I are often stunned by the depths of his spirituality. Liam’s autism gives him many challenges but he has also been blessed with a unique spiritual connection with Jesus. His own particular brand of Divine Mercy.

In this season of Divine Mercy and Autism Awareness, I’d like to give a shout out to everyone in our Church who sees the divine in these amazing kiddos and works to include them in our community, rather than scowl at them or move away from them.  Kudos to the churches who offer special education religious education or special ed in their Catholic schools, or that offer other programs for our special needs kids. Thanks to sensitive catechists who appreciate sensory issues when getting children ready to receive communion and other sacraments. Blessings to the priests who set the tone and example of inclusiveness in the congregation. Thanks to the parents who work to ensure that their special kids can participate fully in the Mass. Thanks to these amazing kiddos for helping us experience our faith in a whole new way. And thanks to Jesus, for Lighting It Up Blue in our Church.

For a godmother who has been there every step of the way.

The altar at the national shrine of St. Rita of Cascia, adorned with roses on her feast day a few years ago. Missing the south Philadelphia procession and celebration of one of my go-to intercessors! St Rita, pray for us! #strita #feastday #catholic #catholiclife
Remember when we could go for a walk with a friend without a concern over social distancing? That’s the scene in today’s Gospel, when two disciples encounter a stranger on the road to Emmaus and they share with him the tragic end of Jesus’ life and of their own hopes. They are downcast, dejected and confused. Sound familiar? Only after Jesus had broken the bread were the disciples’ eyes opened and they could see Him, bringing joy and hope to their despair. Our lives are broken right now. Lost jobs. Lost opportunities to gather to grieve or to celebrate. Lost milestones. Lost education. Lost structure and routine that renders our days chaotic or lonely. Lost security for those vulnerable to abuse or addiction or depression. Lost loved ones. So many of us are walking downcast and dejected, too. But I pray, just like the disciples on the road to Emmaus, our eyes are opened to Jesus as we weather the brokenness in our lives. That we look, not down at the road in fear and confusion, but up at the horizon of hope that He offers. #roadtoemmaus #gospel #stilleaster #catholic #catholiclife #covid19 #quarantine #heisrisen
What did Mary do today, this day after the crucifixion? Had she lain awake all night reliving the horrific images of her son’s death? Or did one of the disciples give her a little warm wine so that she could have some few hours of escape—only to wake with a start as grief enveloped her again? What did she do? it was the Sabbath, so she couldn’t lose herself in cooking or cleaning. She could only sit with her memories, feeling him in her arms, broken and bloody. Did the words of Simeon come back to her, as she finally understood how her own soul was to be pierced? She wouldn’t visit the spot where her son’s body rested; it would be unbearable to pass near the site of his death, the vertical crossbar still there, His blood still visible against the white Jerusalem rock. Did she stay in for fear of the authorities, her connection to the crucified man perhaps putting her at risk? Or did she walk towards the Temple, trying to regain that moment of joy when she found Him there teaching so many years before? Did Mary pray? Or did she rail against the God that so miraculously gave Him to her and so inexplicably took Him from her? Or was her trust in God so complete that she enjoyed a certain peace, not understanding but yet believing? Holy Saturday feels unsettled for us, too. We know Easter joy is coming, but it’s too soon to celebrate. The solemn Good Friday feeling still lingers, but like fog dissipating in the light, as we get closer to the Easter Vigil, hope increases and gloom abates. I like to think that Mary felt this too, that she had some sense in her mother’s heart that somehow, in some way, He was drawing near to her again. That her suffering was lightened by hope, a hope that changed the world. #virginmary #holyweek #holysaturday #resurrection #eastervigil #catholiclife #blessedvirginmary
Since my trip to Texas this month got scrubbed, I figured I could bring a little Texas to me. Ordered brisket and jalapeño sausage from Black’s in Lockhart. Washed it down with a cold Shiner. Now if I could only figure out how to ship George Strait up to me. 🤗❤️
No matter what you are feeling now—fear, anger, frustration, boredom, resignation—this is a momentary affliction. Keep your eyes on the prize! (I need this most of all.)
Sharing once again my favorite statue of the Blessed Mother, located in the basilica above her family home in Nazareth. I think she looks like both the powerful queen of the world she would become and a girl you can envision giggling with her friends as she went to get water. Thank you for your yes, Mary! #annunciation #blessedvirginmary #yes
%d bloggers like this:
%d bloggers like this: