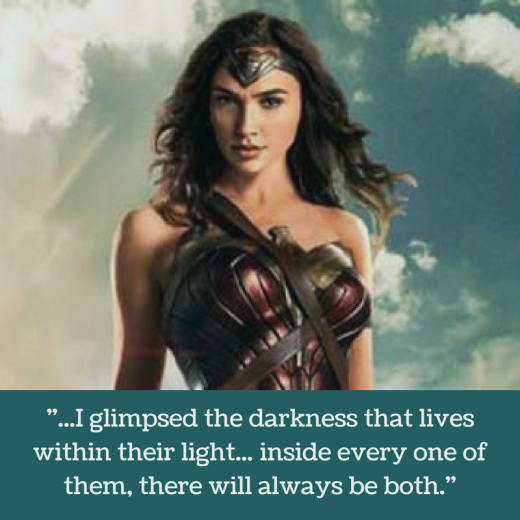 “That was a true work of art.” So said my 12-year-old son, doing a 180 on the new movie, Wonder Woman.  He had been reluctantly dragged along with the family to see the best blockbuster of the summer, but Gal Gadot and the power of love transformed him. As they can transform us all.

I was surprised by my own strong reaction to Wonder Woman. I am not generally a fan of big, summer blockbusters or super heroes.  Any time the phrase “The power of love” is mentioned, I cringe remembering the old Huey Lewis song that got way too much airtime back in 1985 (In the soundtrack of another summer blockbuster, Back to the Future). The Wonder Woman comic book character springs from a checkered past, including a creator who lived with his wife and mistress, the niece of Margaret Sanger. I was also around for the Lynda Carter version in the seventies. I love her but found the show itself a bit hokey.

This summer, though, they got Wonder Woman right. She is smart, athletic, and still gorgeous. Her leather outfit is a tastefully muted red, white, and blue. Wonder Woman 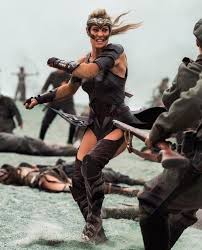 and feminism may finally be coming of age. First, let’s take the Amazons. Gone are the bouncy models of the seventies. Female role models abound. Many of the Amazon extras are former Olympians, and it shows. The battle training scenes are impressive. Almost stealing the show from the impeccable Ms. Gadot, is Robin Wright as Diana’s aunt and trainer, General Antiope. Older women rejoice! She is so cool. Our former Princess Bride executes breathtaking fight scenes, which Wright said were choreographed like ballet. Did I mention she is so cool? She is awesome – even if it was a little hard for me to switch gears, as I was watching Season 5 of House of Cards the same week.

In the fantasy world of Wonder Woman, women and men complement each other, rather than being engaged in a constant battle of the sexes. The Amazons are tasked with defeating the god, Ares, whose evil power is causing men to go to war. As his character says, “… war gives man purpose. Meaning. A chance to rise above his petty mortal little self. And be courageous. Noble. Better.” It is the Amazons’ mission to defeat Ares and end war. However, eras and worlds collide as Steve Trevor (charmingly played by Chris Pine) lands on the Amazons’ island.  Diana decides she must leave her idyllic island for male-dominated WWI-era London to achieve her mission. She and Steve form a true partnership to accomplish the mission. One is not necessarily greater or more heroic than the other. Also worth noting, the lead evil scientist is female. Yay.

The basic themes of the power of love, good versus evil, the importance or truth, and self-sacrifice will reignite your interest in the daily battle of life. Wonder Woman is a champion of peace, albeit with a sword and shield. Some of her greatest powers, like her bullet-deflecting bracelets, are defensive. What girlfriend, wife, or mother among us would turn down a Golden Lasso, which requires those bound in it to tell the truth? I wonder if it works on dogs? “Who chewed my power cord?”

Throughout the movie, Diana questions herself, in ways that women will recognize. Most women have felt underappreciated at one time or another. We do a lot of hard work that isn’t recognized. A scene that resonated with me was at one point when a discouraged Diana says, “My mother was right about the world, she said they didn’t deserve me…”  Steve stops the pity party right away, coming back with, “Maybe it’s not what you deserve, but what you believe.” Hmmm, it’s about what you believe. What we act on reflects what we believe, regardless of the acknowledgement or understanding of others. This is so Catholic!

She is also a rare hero who comes to understand that the struggle is not just about her. She realizes that, despite what she does, men still have to choose good over evil every day: “I used to want to save the world. To end war and bring peace to mankind. But then, I glimpsed the darkness that lives within their light. I learned that inside every one of them, there will always be both. The choice each must make for themselves – something no hero will ever defeat. And now I know… that only love can truly save the world.”  Choosing good is an act of love. Free will, anyone?

Watching this fierce warrior for the power of love made me think of another strong woman whom we often look to for help saving the world. Love, truth, self-sacrifice, choosing to do good, that all sounds a lot like Our Lady. For what it’s worth, I think she’s a pretty cool role model, too. This summer gives us a great opportunity not only to enjoy a little fun at the movies, but examine ourselves. It’s about what we believe.

One thought on “Wonder Woman’s Work is Never Done”

Happy birthday to Tennessee’s own, but America’s favorite, Dolly! #tennesseemountainhome #dolly #icon
Many years ago, as I was walking through a New York City park with my husband and three young sons, an elderly woman looked at my male entourage and said, “You are the Czarina!” (If you know my rather *ahem* “strong personality”, she was eerily accurate!) I thought about her this weekend as I boxed up Christmas. As my kids get older, holidays leave me feeling that subtle shift from mom to matriarch. And I don’t know if I’m ready. It was a particularly good Christmas, with our entire family gathered together—including a new daughter-in-law-to-be. But I was acutely aware these Christmases around my own hearth with all the kids and our mothers will soon fade to memories. My mother is 88 and she’s declined a great deal in the last year. As my sons bring daughters into our family, so they will be pulled by other families to celebrate with them. And when children come, family celebrations will gradually center on their homes, with their kids dreaming of Santa in their own beds, as my three boys did so many years ago. I won’t always be the one to plan the menu and decorate the home where we will all gather. I won’t always have the older generation of women by my side in the kitchen. I’ll become the sous chef and I will blend into the rhythms of the new families my children create. In other words, I’ll have to give up control, something we Czarinas don’t do well. Every season of change seems to bring a loss of control, doesn’t it? But giving up control is an opportunity to embrace the new and trust in God, not our own will—and ultimately to grow. So while I’m nowhere near dowager status, and as tempted as I am to go kicking and screaming into matriarchy, I won’t. I’m going to straighten my tiara and walk happily into my new role when it comes. Like a good Czarina should! #catholiclife #catholic #momlife #matriarch #boymom #seasonsoflife
This is my Aunt Lucy’s coat, just as she left it the last time she entered her house. I’ve written before about closing up her house (the one my grandpa built) after she passed away in September. I went through her personal papers to settle her estate and sorted through her closet and cleaned out her kitchen. But moving her coat felt wrong, because I could picture her putting it there on the chair and going to bed, never to awaken. Today would have been Lucy’s 90th birthday. Please pray for her soul and for our family. #catholic #stlucy #prayforus #family #holidaygrief #loss
InstaAdvent Day 22: Today’s prompt is hope. I know I should write something deep and meaningful as we await the joyful hope that is Jesus. But I’m going to share what’s on my heart right this minute when I think of hope. I hope I get my house clean before my mother-in-law gets here! 😂 (Love you, Liz! 😘) #hope #bhadvent19 @bustedhalo
InstaAdvent Day 21: Today’s prompt is community. This picture is of a group of ladies packing up 275 bags to distribute to the homeless on Christmas. It started with a few friends with an idea and open hearts. It has grown to twice monthly dates serving meals at local shelters, packing bags like these at Christmas and Easter and many special events to help those in need. Along the way, we have a lot of fun, too. Not only do we help out in the community, but we’ve created one of our own, too. #community #givingback #bhadvent19 @bustedhalo
InstaAdvent Day 10: Today’s prompt is #christmasjammies These Buc-ees lounge pants were my favorite acquisition on a recent trip to Texas! I think I will pair them with my leopard (not beaver) Santa hat on Christmas morning! #bhadvent19 #bucees #texas #christmasmorning @bustedhalo @bucees
%d bloggers like this:
%d bloggers like this: