We need a little Christmas – NOW! While I know you had a great 2018, I also know the rest of us are more than ready to see the year end. For us, the year had a rocky start, and the avalanches just kept coming. It is no wonder then, that I joined the rest of my hometown in starting the Christmas season well before Thanksgiving. If you didn’t get the lighted dear trio at our new Costco shortly after it opened on October 19, you were out of luck (BTW, we got the deer. Oh, yes, we did indeed.). On October 22, Sirius XM announced it would launch a record 16 holiday stations and we had the channels that went live on November 1 programmed in by sundown (with convenient dashboard guides made by yours truly). Garland and wreaths were running low the second week in November. Tickets to the holiday shows at our local theaters were in short supply by Thanksgiving. I suspect that if 2019 continues as did 2018, we will be launching Christmas again in June, which would put Advent shortly after Easter. 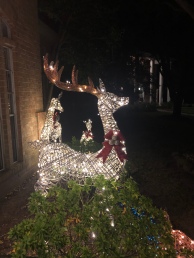 As you know from last year, I have become an aficionado of Hallmark and Lifetime holiday movies. Perhaps sensing the national mood, Hallmark’s “Countdown to Christmas” started on October 27, with Happy the dog as its mascot (Did you see him at the National Dog show?).  The Hallmark Channel and its sister network, Hallmark Movies and Mysteries set another record this season, airing 37 new seasonal films this year, compared to Lifetime’s 14.  I even have the Countdown app downloaded to check off the new Hallmark movies I have seen. So far, I have watched 9 out of the 22 on Hallmark’s main channel.  I haven’t done as well with “Miracles of Christmas,” mainly because I can’t find the channel easily. You would think they would be together. I digress. My husband and in-laws are genetically pre-disposed to cry at these movies, and Ashby and I have created a special birthday gift for grandpa (see picture). We have already had requests to make more. This Thanksgiving, we literally couldn’t stop watching these movies, apart from a few breaks for key football games. Speaking of which: A&M fans. Respect. I digress, again. 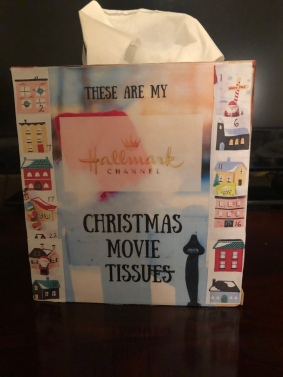 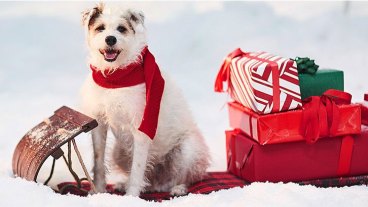 Being in the holiday movie club has many advantages. You not only get to see the latest in red and green outerwear and red pickup trucks, you get to watch the drama behind green poinsettias, Christmas tree farms/bakeries/family businesses about to go under, evil developers replacing charming, historic buildings/stores/family estates with condos/parking lots/ mega-stores. There are a plethora of young men and women being hired to pose as boyfriends/girlfriends/fiancé(e)s. Really? Where were they when I was dating?

And so, the game is afoot. Lifetime got high marks from us for The Christmas Contract a movie that reunites the One Tree Hill cast, a show I have never seen. Already this year, I have gotten to watch TWO versions of Pride and Prejudice, re-done Hallmark-style (Surprisingly, Ted’s eye-rolling was limited): Hallmark Princess Lacey Chabert in Pride, Prejudice, and Mistletoe and Christmas at Pemberley Manor, starring Jessica Lowndes, another Hallmark Princess who looks a lot like Ted’s cousin, Pam. We call her Not-Pam around our house. We both loved the subtle notes of A Christmas Carol in A Shoe Addict’s Christmas starring Hallmark Queen Candace Cameron Bure and Jean Smart.

Perhaps the real star of the show has been Hallmark’s latest “When you care enough,” ad campaign featuring a voice-over by Fred Rogers, from his Emmy acceptance speech in 1997. This two-minute spot not only gets Ted going for the tissues every time, it has even caused my eyes to glisten ever so slightly. While accepting a Lifetime Achievement Award, Mr. Rogers did not thank everyone he ever knew but he invited the audience to join him in spending 10 seconds thinking of the people who “have loved us into being.”:

So many people have helped me to come here to this night.  Some of you are here, some are far away and some are even in Heaven.  All of us have special ones who loved us into being.  Would you just take, along with me, 10 seconds to think of the people who have helped you become who you are, those who cared about you and wanted what was best for you in life.  10 seconds, I’ll watch the time. Whomever you’ve been thinking about, how pleased they must be to know the difference you feel they have made.  You know they’re kind of people television does well to offer our world.  Special thanks to my family, my friends, and my co-workers in Public Broadcasting and Family Communications, and to this Academy for encouraging me, allowing me, all these years to be your neighbor.  May God be with you.  Thank you very much.

That, in a nutshell, sums up the Christmas Spirit we need so much right now.  In fact, we need it every day of the year. We need the time to take a moment of silence – when someone else can watch the time for us – to think about those who have shown us love and recall the difference they have made in our lives. I don’ regret starting Christmas early this year. Leave it to Mr. Rogers to teach us this. I hope I can keep it going as long as possible.

May God be with you,

One thought on “We Need a Little Christmas in the Neighborhood”

The altar at the national shrine of St. Rita of Cascia, adorned with roses on her feast day a few years ago. Missing the south Philadelphia procession and celebration of one of my go-to intercessors! St Rita, pray for us! #strita #feastday #catholic #catholiclife
Remember when we could go for a walk with a friend without a concern over social distancing? That’s the scene in today’s Gospel, when two disciples encounter a stranger on the road to Emmaus and they share with him the tragic end of Jesus’ life and of their own hopes. They are downcast, dejected and confused. Sound familiar? Only after Jesus had broken the bread were the disciples’ eyes opened and they could see Him, bringing joy and hope to their despair. Our lives are broken right now. Lost jobs. Lost opportunities to gather to grieve or to celebrate. Lost milestones. Lost education. Lost structure and routine that renders our days chaotic or lonely. Lost security for those vulnerable to abuse or addiction or depression. Lost loved ones. So many of us are walking downcast and dejected, too. But I pray, just like the disciples on the road to Emmaus, our eyes are opened to Jesus as we weather the brokenness in our lives. That we look, not down at the road in fear and confusion, but up at the horizon of hope that He offers. #roadtoemmaus #gospel #stilleaster #catholic #catholiclife #covid19 #quarantine #heisrisen
What did Mary do today, this day after the crucifixion? Had she lain awake all night reliving the horrific images of her son’s death? Or did one of the disciples give her a little warm wine so that she could have some few hours of escape—only to wake with a start as grief enveloped her again? What did she do? it was the Sabbath, so she couldn’t lose herself in cooking or cleaning. She could only sit with her memories, feeling him in her arms, broken and bloody. Did the words of Simeon come back to her, as she finally understood how her own soul was to be pierced? She wouldn’t visit the spot where her son’s body rested; it would be unbearable to pass near the site of his death, the vertical crossbar still there, His blood still visible against the white Jerusalem rock. Did she stay in for fear of the authorities, her connection to the crucified man perhaps putting her at risk? Or did she walk towards the Temple, trying to regain that moment of joy when she found Him there teaching so many years before? Did Mary pray? Or did she rail against the God that so miraculously gave Him to her and so inexplicably took Him from her? Or was her trust in God so complete that she enjoyed a certain peace, not understanding but yet believing? Holy Saturday feels unsettled for us, too. We know Easter joy is coming, but it’s too soon to celebrate. The solemn Good Friday feeling still lingers, but like fog dissipating in the light, as we get closer to the Easter Vigil, hope increases and gloom abates. I like to think that Mary felt this too, that she had some sense in her mother’s heart that somehow, in some way, He was drawing near to her again. That her suffering was lightened by hope, a hope that changed the world. #virginmary #holyweek #holysaturday #resurrection #eastervigil #catholiclife #blessedvirginmary
Since my trip to Texas this month got scrubbed, I figured I could bring a little Texas to me. Ordered brisket and jalapeño sausage from Black’s in Lockhart. Washed it down with a cold Shiner. Now if I could only figure out how to ship George Strait up to me. 🤗❤️
No matter what you are feeling now—fear, anger, frustration, boredom, resignation—this is a momentary affliction. Keep your eyes on the prize! (I need this most of all.)
Sharing once again my favorite statue of the Blessed Mother, located in the basilica above her family home in Nazareth. I think she looks like both the powerful queen of the world she would become and a girl you can envision giggling with her friends as she went to get water. Thank you for your yes, Mary! #annunciation #blessedvirginmary #yes
%d bloggers like this:
%d bloggers like this: