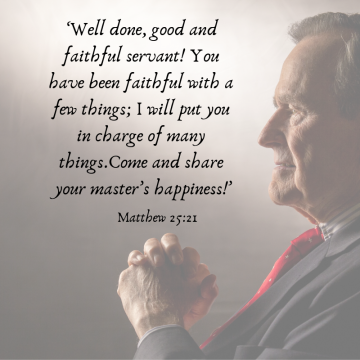 “Who is that long-haired hippie?”

“No, the beard’s not quite right.”

“It’s the Oak Ridge Boys. They’ve been traveling around with their suits for the last few weeks in case the President passed.”

Not your usual holiday party chit chat, huh? By way of explanation, I was hosting a Christmas gathering when a friend asked if we could turn on the local news coverage of the “private” funeral for Houston’s most famous adopted son, President George H.W. Bush.  It seemed to make perfect sense that we exchanged gifts while Reba sang The Lord’s Prayer.

As weird as it may sound, watching a funeral – specifically this funeral -during a Christmas party was oddly festive. There were tears, but mainly the ceremonies were truly celebrations of a remarkable life. It was a week of contrast; the city mourned the loss of a citizen it loved, but also reveled in fond memories of a life well-lived. President Bush was one of the rare people who was beloved by the country.

For once, we had a good reason for last week’s traffic problems here in Houston. Parts of the city came to a halt as the President’s body went back and forth between the Galleria and Ellington Airport, by way of Washington, DC, before boarding a train in North Houston to head to its final resting place in College Station.

For me, watching the official state service at National Cathedral in my original hometown and the Houston service in my current hometown was a “worlds collide” moment.  The contrast made me realize how much I have changed as I have moved around.  I now think of both cities as home and I bet that is a feeling the President understood as well. The formal state service featured traditional hymns, military bands, and tributes from historians, heads of state, and royalty. The Houston funeral also had a number of dignitaries, but titles were beside the point. These were family and friends.  I watched as people recalled the friend, leader, father and grandfather who summered in Maine, yet chose Texas as his home state. He was the East Coast patrician who hated broccoli but loved pork rinds. There was one thing that caused no contradiction, however; every tribute showed the joy people felt at having this man in their lives. We should all be so lucky.

Of course, for me (and I bet you, too!) another star of the week was President Bush’s service dog, Sully. Even though they were together briefly, these two made a splash. I spent a good portion of the week trying to figure out how to get Sully together with our Scout, who would obviously be a perfect match. She could be First Lady of Walter Reed. I wonder if he would be OK with a girl who has a tattoo, even if its just for identification purposes? (#scoutandsullyfurever) 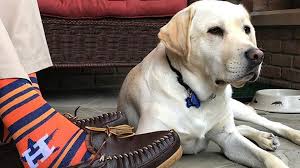 Years ago I read the collection of letters, “All the Best, George Bush,” and one of my favorite passages has been quoted a lot this week – as it should be – the President’s advice to young people.

…My advice to young people might be as follows:

I think more than his political legacy, President Bush showed us how to live a full, happy life as a servant of God. Perhaps this is the real Bush legacy and why people responded so strongly to his passing. His memory creates a powerful example of decency and positivity that we need. What can we do to remember this good and faithful servant? Here are some of my ideas:

To the President, I say “Well done, good and faithful servant, well done.” May we all live well enough that the same may be said of us at the end of this life. May we leave others speaking of us with joy.